Almost half of Australians believe immigration should be reduced, poll finds 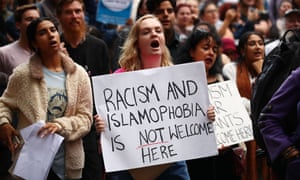 Almost half of Australians believe immigration should be reduced but more people are broadly positive than negative towards the largest cohorts of migrants, including skilled workers and refugees, according to a new global survey shared exclusively with Guardian Australia.

The poll of more than 25,000 people in 23 countries found that in Australia the strongest negativity was reserved for descriptions of migrants such as “people coming here to claim benefits” – categories which don’t exist under Australia’s immigration program.

The YouGov-Cambridge Globalism Survey found 29% of respondents believed “the costs of immigration outweigh the benefits” for their local area. The same proportion believed costs and benefits were equal, while 23% felt the benefits outweighed the costs.

The survey results have raised concerns about the extent of the impact of anti-immigration rhetoric in Australia’s public debate.

The global survey of 23 countries took place in February and March and included a representative poll of 1,006 Australians adults.

Less than half of Australian respondents (46%) thought immigration should be reduced, while 23% felt it should be increased. The remainder either believed it was fine as it was, or they didn’t know.

The vast majority of the YouGov survey respondents – 70% – felt the number of immigrants moving to Australia had increased, while 54% reported an increase to their own local area.

Net migration, which includes temporary entrants such as students and short-term workers, has risen. But the Australian government recently cut its intake cap on permanent migrants from 190,000 to 160,000, formalising the past two years’ actual numbers, which have been kept low.

The survey also asked respondents about their attitudes towards particular types of immigrants.

It found 70% of people were positive towards “qualified professionals coming here with a job offer” – a migration pathway that brings about 112,000 people annually.

The respondents were also generally positive towards receiving refugees, with 40% thinking it was good and 32% saying it was “neither good nor bad” to have people coming to Australia to flee war or persecution.

However, 56% though it was bad to have “unskilled labourers coming here to search for work” and 75% were against “people coming here to claim benefits”.

Neither category is a migration pathway to Australia.

In 2018, the annual Lowy poll showed for the first time more than 50% of Australians preferred a lower annual immigration intake. The result was a 14-point rise from 2017’s 40%.

“My interpretation at the time was there had been a pretty vigorous debate … about migration, the level of migration and the pressure on things like housing prices and infrastructure,” Alex Oliver, the director of research for the Lowy Institute, told the Guardian.

The sharp increase suggested “that some of this debate and rhetoric was actually having an impact on the way people had viewed immigration”, she said.

Oliver said successive polls showed Australians were generally positive towards immigration while having some reservations about its level.

Australia has for a number of years been the site of intense debate and negativity around migration and refugees.

In October, Coalition senators voted in favour of a motion that “it’s OK to be white”, before reversing their position and saying it was an “administrative error”.

Following the maiden speech of senator Fraser Anning, in which he called for a “final solution” to Muslim immigration, other senators lined up to shake his hand.

The current immigration minister, Peter Dutton, has also been criticised for his rhetoric about non English-speaking immigration groups, and allegations about “African gangs” in Melbourne, which were also voiced by other cabinet members including the former prime minister.

“I think it’s really important to remember that people form their views on important issues like immigration … from the notions and language put forward by our leaders,” Mary Patetsos, chairwoman of the Federation of Ethnic Communities Councils of Australia (Fecca), told the Guardian.

Patetsos said Australia had gone through a three to five-year period of “negative discourse” around migration to the country, which created “a sense of us and them instead of a sense of us”.

“Instead of saying we have – as a society – joint and common problems to solve, like employment rates, access for kids to good schools and public hospitals, instead of creating a sense of unity and togetherness, the language has been about [us and others].”

Migration was a “key lever” for the Australian government and economy, Patetsos said, as well as the basis of modern Australia.

“I really struggle with the notion that we started migration and at one point we can shut it off. We are a nation of migration, it’s how we formed.”

The polling was carried out in February and March 2019.