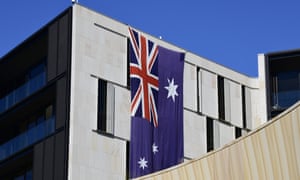 Every few months, another disabled person in our immigration system hits the headlines after they are deemed to be too much of a burden for the fragile Australian state. Each time, the community is outraged, signing petitions and begging the immigration minister to intervene. Sometimes he does. Sometimes the family is forced to leave. But the rules that create these situations remain the same, secure in their bipartisan support.

Kayban Jamshaad is two years old, and was born in Bunbury, WA. His mum, here on a skilled visa, has applied to stay. Her visa category means that Kayban wouldn’t be eligible for our public health system if he stayed, but that doesn’t matter. He has been threatened with deportation.

Australia is one of a handful of rich countries across the world that rejects nearly all immigrants with disability, saying they would create too much of a potential cost burden to the country.

When people apply to come to Australia, on just about all visa categories, they are required to undergo health checks. People have to demonstrate that granting them a visa won’t “result in a significant cost to the community or prevent Australian citizens from accessing healthcare or community services in short supply.”

Our health system isn’t perfect, but neither is it wavering near collapse, so fragile that the existence of more people with disability, who may not even use it, would threaten its viability.

Sumaya Bhuitan had lived in Australia since she was eight, but her disability was seen as a reason she would have to leave. Last-minute pleas by her mother, a GP in Western Sydney, meant that the family were allowed to stay, promising Sumaya wouldn’t become a cost to Australia.

We don’t count other potential costs like this; we don’t ask migrants to tally up their potential road use and reject them on the basis they will be too much of a burden on our road supply. Nor do we make potential immigrants estimate a possible future cost to our family court system in case of future divorce, or the possible cost of a potential childbirth.

This discriminatory “cost” argument has a long and tawdry history and is baked into Australia’s very federation. As well as being deeply racist, Australia’s Immigration Restriction Act of 1901 had “other clauses and other sections … which are absolutely eugenicist in a different way, and they are to do with excluding people, not on the basis of race, but excluding people on the basis of their mental health. Also their physical health.”

Australia’s adoption of old age and invalid pensions were seen as modern, progressive reforms and was watched closely by other democratic states in the early 1900s. But these innovations were limited to certain kinds of citizens, with those limitations written into the legislation.

The invalid pension was not available to “Aliens, Asiatics or Aboriginal natives of Australia, Africa, the Islands of the Pacific, or New Zealand”. Australians talked openly about wanting this “new” country to be white and able-bodied. Disabled people also had to be of good character – the right kind of disabled.

After the second world war, many families coming to Australia were forced to leave disabled children behind, as Australia wanted migrants who were “physically fit”. Senior lecturer in history at the University of New South Wales, Ruth Balint, says that “moral pressure by allied welfare workers to institutionalise disabled children contributed to children being left behind in Europe by families who emigrated”.

In 2010, the joint standing committee on migration considered all of this, reviewing how disability is treated in our migration system, for all kinds of migration, including refugees.

This “cost burden” is a contrivance, and one that disabled people who are citizens of Australia are also often tarred with. In previous decades, we were seen as objects of charity, broken and needing to be locked away. Not much has changed.

Headlines such as “Disability a $17 billion burden” talk about how expensive disabled people are, and how we will put a “growing burden on taxpayers”. No one refers to our “defence burden” or our “paediatric health burden”. We don’t have a “veteran’s health burden”. What we do have is a problem in how we think about people with disability and our immigration system reflects this.

This system says that we, as Australians, can see no other role for disabled people than as cost burdens. We have no ability to contribute, economically or otherwise in this framework. We have no value, only a cost.

Australia’s discriminatory migration system, with its long history, has to go. Disabled people, including migrants, are not burdens. Disabled people have always been and will always be part of the Australian community.