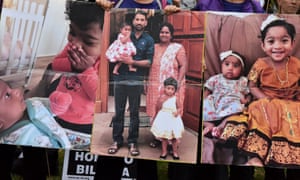 The Sri Lankan family taken from their Biloela home to immigration detention in a dawn raid have lost their bid for the high court to review the their asylum claims.

In December the federal court upheld the assessment authority’s decision to reject the asylum claims of the mother and one daughter. At the time the court ordered the Australian government not deport them before 1 February.

On Tuesday morning the full bench of the high court ruled against the family’s application for special leave to appeal the case.

Nades and Priya arrived in Australia in 2012 and 2013 respectively, by boat, and sought asylum. The couple married and had two daughters, now aged four and two. Until they were arrested and detained by Australian Border Force in March last year, they lived and worked in the Queensland town of Biloela, where the residents have rallied in support of the family.

The youngest daughter, Tharunicaa, turns three next month, and last week Guardian Australia reported on serious concerns over the level of care she had received for dental and other problems.

The family have remained in detention at the Melbourne immigration transit accommodation for more than a year, and their supporters fear the high court decision will prompt the government to deport them before Saturday’s election.

On Tuesday morning the family had gone to playgroup for the first time after months of advocating. There are no playgroups inside detention, and permission was required to allow the girls to go elsewhere and be able to interact with other children.

Angela Fredericks, a friend of the family and advocate for their release, said they were “devastated” by the court’s decision.

The family has claimed a fear of persecution if returned to Sri Lanka, based on family links to the Liberation Tigers of Tamil Eelam, and the fear of retribution as “failed asylum seekers”.

“We’re quite worried about a potential deportation of Priya and Nades at any moment. The family is devastated and I’m quite personally devastated.”

He noted last month’s terrorist attacks in Sri Lanka and said the human rights situation there was “increasingly unstable”.

“Many Tamil Christians died in the Easter attacks, but Tamils are also living in fear of the Sri Lankan government as they crack down on minority groups,” Mylvaganam said.

He told Guardian Australia Priya and Nades were from Batticaloa, one of the places targeted in the bombing attacks that killed more than 250 people.

“The security situation has escalated especially in their home town. This family shouldn’t be deported back,” he said.

Mylvaganam said both Nades and Priya had faced violence and intimidation in Sri Lanka.

“Priya fled the country after witnessing her fiancée and other men in her village being burned alive by the Sri Lankan army. She has genuine concerns about going back.”

After their appeals were rejected the family sought ministerial intervention to grant them visas, to no avail.

“If we can make it through the next few days, we’re deeply concerned about what could happen after the election,” said Fredericks. “Even if the appeal proceeds, this family will be trapped in detention for many more months unless the immigration minister intervenes.”

It’s understood the minister, David Coleman, has made a number of interventions in recent weeks, granting visas to people who, in some cases, have been in detention for years.

The minister has discretion to grant visas and is under no legal obligation to provide reasons for his decisions.

Fredericks said they were now urging people to contact the immigration minister or their MPs to advocate for intervention on the family’s case.

“[The minister’s office] has been saying they wouldn’t intervene while it was before the court,” she said.

“Now the court process is finished; now the time is to do it.”

The residents of Biloela have run a high-profile campaign in support of the family, calling for them to be released “home to Bilo” and allowed to stay permanently.

Following reports of Tharunicaa’s dental issues and vitamin deficiencies, PJ Sobhanian, a dentist and councillor from nearby Gladstone, offered to treat the girls as soon as they are brought back to Biloela.

“As an Australian I am outraged by this. As a health practitioner I am distressed.”