Cate Blanchett to star in Stateless, a new TV series about immigration detention in Australia 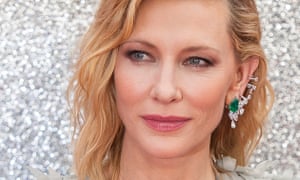 Cate Blanchett has co-created and will star in a new television drama about Australia’s onshore immigration detention regime.

Stateless, a six-part drama series for the Australian Broadcasting Corporation, will focus on four characters whose paths cross when they are caught up in Australia’s immigration system and held in one of Australia’s desert-based detention centres. The characters include a flight attendant fleeing a cult, an Afghan refugee, a down-and-out Australian father and a bureaucrat entangled in a scandal.

Co-created by Blanchett, Tony Ayres and Elise McCredie – one of the writers behind the acclaimed 2017  the ensemble drama will also star the UK’s Dominic West alongside the Australians Jai Courtney, Asher Keddie, Fayssal Bazzi and Yvonne Strahovski.

Blanchett will also act as executive producer on Stateless along with her husband, the playwright and director Andrew Upton, and Ayres. The series is scripted by McCredie and Belinda Chayko, the showrunner of SBS’s 2018 asylum seeker drama Safe Harbour, and will be directed by The Dressmaker’s Jocelyn Moorhouse and Emma Freedman.

The production will appeal to a global audience. Many of its stars have prestige TV experience and Hollywood cachet: West’s memorable performances in The Wire and The Affair, and Strahovski’s current role as Serena Joy in The Handmaid’s Tale, will resonate with overseas audiences, while Courtney’s most high-profile work includes the action films Jack Reacher (2012) and A Good Day to Die Hard (2013).

Blanchett said while the story was focused on Australia, it explored global themes: “The desire for personal freedom, the need for social stability, an escalating lack of faith in the political process and the deeply unsettling impact this has on individual lives.”

Ayres said the show “asks one of the most vexing questions of our times – how do we as a nation maintain control of our sovereign borders whilst retaining our own humanity?”.

He told the industry magazine IF: “We wanted to tell the story of onshore detention from different perspectives, not just the detainees, but a whole range of people including a policy maker who works in Canberra. Onshore detention is a part of our history which is rapidly being forgotten.”

Stateless will begin production in South Australia in June and is expected to air on the ABC in 2020.