The federal government has closed a Victorian immigration detention centre, and plans to partially close another in Sydney, saying its efforts to stop people seeking asylum by boat has reduced the number of people in detention.

The last of Maribyrnong Immigration Detention Centre’s detainees were transferred on Monday, emptying the controversial facility and adding it to the list of 19 closed or put into contingency since September 2013.

It comes amid security upgrades and new wings across the network to accommodate a growing number of medium- and high-risk detainees whose visas were cancelled on character grounds.

The immigration minister, David Coleman, also announced the Blaxland compound inside Villawood detention centre would close in mid-2019. It follows the closure of the Christmas Island facility in October. 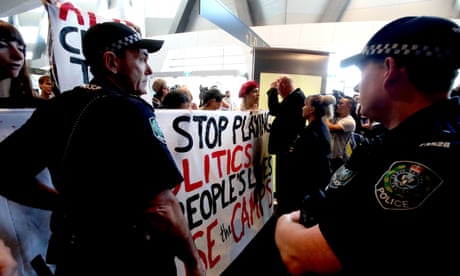 The federal government said the closures were a sign of the success of its military-led response to the large number of people seeking asylum in Australia by boat under the previous Labor government.

“At its peak in July 2013, there were more than 10,000 people held in immigration detention facilities in Australia, including 2,000 children,” Coleman said.

“This government has stopped the boats, got the children out of detention and closed the once full immigration detention facilities.”

At 30 November last year, more than 1,300 people were detained in Australia’s inshore detention network, down from 1,715 at 30 June. More than one in five had spent longer than 730 days in detention.

Across all detention centres there were 405 people held on 501 visa cancellations.

The bulk of those in onshore detention at November were held in Villawood (450) and Yongah Hill detention centre, outside of Perth (229).More than 16,000 people were living in the community on bridging visas.

The government’s claim there are no children in detention is disputed. It maintains that those housed in a “residential-style facility”, such as nine-month-old Isabella who has spent her entire life inside Melbourne Immigration Transit Accomodation centre (Mita) with her mother Huyen, and the young daughters of a Tamil couple facing deportation, are not strictly in detention.

People transferred from Nauru to Australia for medical care – including children – have also been housed in detention centres or guarded hotels for weeks or months before being allowed to live in the community.

While the Coalition government has worked to reduce the number of asylum seekers held in detention, it has simultaneously sought an increasing number of deportations on character grounds, prompting the building of new, higher security sections at other facilities, and increasingly tough security restrictions.

In 2017 the federal government began construction of a new wing at Mita, to accommodate the growing number of medium- and high-risk detainees facing deportation under section 501 of the Migration Act.

In 2017-18 more than 900 visas were cancelled on character grounds, including members of outlaw motorcycle gangs, drug traffickers and sex offenders, who the department said posed an ongoing risk.

“The department has significantly changed the way it manages detention and status resolution, with the safety and security of the Australian community at its centre,” it said in its annual report.

“Improved risk-based assessments support the appropriate placement and management of individuals while their status is being resolved, while places in held detention is reserved for those individuals who pose a risk to the safety and security of the Australian community.”

Amid the toughening of conditions, the legality of indefinite administrative detention is facing a court challenge this year, on the basis it has become punitive.

Mainland centres have been the subject of multiple complaints of detainee mistreatment by security staff, and overzealous visitor restrictions. There have also been several violent incidents and deaths.

Internal movement of detainees across the onshore network has also concerned legal groups and advocates. The family of 22-year-old Sarwan Aljhelie, who took his own life at Yongah Hill, said he had recently been transferred without explanation from Villawood centre in Sydney, which was near his family and children.

Following a disturbance at the centre – sparked by the man’s death – dozens of detainees were moved to Christmas Island and then back again to other mainland centres.