Inquiry into Paladin expanded to cover all Manus and Nauru contracts 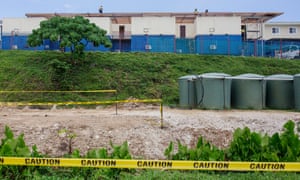 The auditor general is expanding its inquiry into the government’s controversial deal with Paladin to cover all offshore processing contracts, after a string of revelations about the way it has handed taxpayers’ money to companies working on Manus Island and Nauru.

In February, Labor referred the $423m Paladin contract to the auditor general to investigate why the Department of Home Affairs chose the “inexperienced and unknown company” to take over garrison services on Manus Island following the closure of the detention centre.

On Monday, the auditor general agreed to expand its investigation and assess “whether the Department of Home Affairs has appropriately managed the procurement of garrison support and welfare services” for all of its immigration processing centres.

The audit, entitled The Department of Home Affairs’ procurement of garrison support and welfare services, is forecast to deliver its report in January 2020.

The shadow immigration minister, Shayne Neumann, wrote to the auditor general last month, requesting it add an $82m contract with NKW Holdings, and a $9m payout for a cancelled contract with Toll, to its inquiry.

“I am concerned that consistent examples of serious maladministration in this area – combined with the minister’s refusal to address these matters – will impact more broadly on community confidence in the [Australian public services] capability to manage public money with due diligence and probity,” Neumann said.

Canstruct, a Brisbane-based construction and engineering firm, had limited experience running garrison and welfare services when it bid for the $591m contract in a limited tender process in 2017.

The lucrative contract brought a $43m profit in seven months to the company, and human rights lawyers believe it could make $110m by the time its contract expires at the end of the month.

In February, Cheryl-Anne Moy, a senior home affairs executive, told Senate estimates it was difficult to find companies willing to work at regional processing centres because there was “too much noise for their organisations and international companies around regional processing”.

There is no suggestion that Canstruct, a firm with 500 staff and contractors, is not providing proper garrison or welfare services, or that commonwealth procurement rules were breached.

However, the use of another limited tender process added to the criticisms of the department for the way it handled major offshore processing contracts. The Canstruct deal came just months after the release of a previous report into the same issues.

The 2016-17 report was highly critical and found the department had “fallen well short of effective contract management practice”.

Guardian Australia also revealed in February that the Australian government gave $21.5m to Pacific International hospital to run healthcare on Manus for 10 months without finalising a proper contract.

PIH was selected through a limited tender process and the money was handed over through a series of letters of intent, rather than a proper contract. That’s despite damning findings that PIH provided inadequate care in the 2014 death of asylum seeker Hamid Kehazaei.

PIH is chaired by former PNG deputy prime minister Sir Moi Avei, who was in 2007 found guilty of misconduct in office for the way he handled public funds.

Labor welcomed the announcement of the investigation.

“This is over half a billion of taxpayers’ dollars that the Liberals called a ‘distraction’ and have tried to sweep under the rug – they now have nowhere to hide,” Neumann said.

“This is the accountability and transparency the Australian taxpayer expects and deserves.”