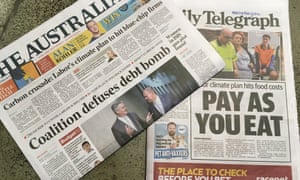 The Daily Telegraph and its stablemates have taken the blowtorch to Labor’s climate policy, labelling it a “lunchbox tax” across numerous news stories, editorials, graphics and opinion pieces.

The barrage of negative stories is in sharp contrast to the glowing previews of Scott Morrison’s first budget as prime minister which the publications say will bring “tax relief for millions of workers”.

The treasurer, Josh Frydenberg, and finance minister, Mathias Cormann, are pictured in smart blue suits on the front page of the Australian with the accompanying report reassuring readers the government will “declare an end to the debt and deficit disaster the Coalition inherited from Labor six years ago”.

The release of the final component of Labor’s climate change policy has sparked a tidal wave of negative coverage, but none so extreme as that in Rupert Murdoch’s Sydney tabloid.

“Pay as you eat” and “Labor climate plan hits food costs” were the front-page headlines as the Tele followed Scott Morrison’s line that the “carbon tax 2.0” would impose massive costs on Australians.

Inside, an editorial also criticises the plan: “And, for that matter, how will average families feel if they are hit by four-figure quarterly power bills and then get hit again when shopping for food?”

The rightwing thinktank the Institute of Public Affairs was given two-thirds of a page to rail against the policy, which research fellow Andrew Bushnell alleges would punish “ordinary Australians” while putting a smile on the faces of “inner-city greenies”.

“What do Bill Shorten and Mike from Married At First Sight have in common? They are both gaslighting the entire nation,” Bushnell said.

The Australian was a little more subtle than the Tele, labelling the Labor policy “a re-Rudd”.

“Labor leader Bill Shorten is standing firm behind his plan to cut carbon emissions despite fierce Morrison government attacks labelling it ‘a re-Rudd of failed policy’,” the Oz reported.

“Upwards pressure will be put on the price of biscuits, beers, soft drink and groceries under Labor’s carbon plan, which will capture some household name brands under an expanded cap-and-trade carbon scheme,” the Queensland masthead said.