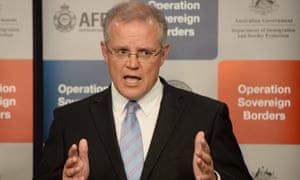 In a recent interview Scott Morrison clearly relished the opportunity to explain how he’s the kind of guy who does what he says he’s going to do. It’s a good pitch. Simple, easy to understand and geared to be appealing to many, but it sent a shiver up my spine.

It was an echo of Morrison the immigration minister. The man who was willing, at times, to barter with the fate of the most vulnerable simply to get his way.

To be clear – I do not believe that Morrison was a bad minister. If you can get past the absurdist pantomime of the weekly briefings, Operation Sovereign Borders was well run and effective under his watch. It was also clear from observing him that he was a minister who was engaged and striving to understand his brief in a way that some others choose not to.

The issue for me was always his temperament. The clearest example of this concern was the fight – lasting more than a year – to implement temporary protection visas in 2014.

At the time, I was working in the area of the department responsible for the assessment of refugees. It was a surreal experience. Everything was effectively put on hold for well over a year as we watched politicians fight over a policy that never came close to making coherent sense. In the end legal norms, the proper operation of the refugee assessment system and the most basic ethical standards were all undermined to get that policy over the line.

The Coalition inherited and endorsed a policy that prevents any asylum seeker who arrived via boat from being resettled in Australia. Temporary protection visas (TPVs) would only ever apply to people who had made it to Australia’s shores prior to January 2014. The idea that asylum seekers undeterred by measures such as offshore processing or boat turnbacks would be dissuaded by the precise nature of other people’s visa status is fanciful.

Morrison is not a stupid man – he would have been aware of this. Implementing this policy was clearly never about the national interest. From the very start it was about Morrison making sure everyone knew he was a man who did what he said he would, regardless of the cost. That’s what makes the aggressiveness with which he fought for this policy so disconcerting.

It started with a sustained campaign of legal chicanery aimed at preventing any further asylum seekers who had arrived by boat from receiving a permanent protection visa. The legal campaign included:

The fact that Morrison knew that a lot of the above was likely to be disallowed or found unlawful has already been documented. What we were told in the department was that the minister was informed of the dubious legal nature of these tactics and was “comfortable” with them.

The impacts weren’t contained solely to the legal realm though. There was also the kind of damage wrought when a government chooses to shut down, and leaves issues and people to rot.

From late October 2013 we were required to “go slow” and barely engaged in any meaningful processing of asylum seekers. We didn’t really start up again until the full implementation of TPVs through the “fast-track” process in September 2015.

This had serious consequences for the mental health of asylum seekers. Uncertainty is corrosive and not every threat or incident of self-harm makes it to the media. Those who had been left without a decision on their fate for over six years were often struggling by the time we finally saw them.

At present there are still over 8,000 asylum seekers who haven’t had their cases heard. Without drastic changes, the last will have waited almost a full decade before they finally get an outcome. Prior to coming to power, the Coalition promised to ensure these people’s status was resolved as quickly as possible. In practice they’ve chosen to allow them to flounder.

So what was this for? Did Morrison at least achieve what he wanted? The answer is: sort of.

It is true that temporary protection visas were eventually reinstated by the government. However, their implementation was fatally undermined by a concession Morrison made to Clive Palmer in September 2014 to get the policy over the line. This concession was to give all asylum seekers the option to apply for either TPVs or a new kind of visa class known as safe haven enterprise visas (Shevs). Though they started as the concession, Shevs quite quickly became the policy in practice.

There are a number of reasons why Shevs are a terrible policy that I won’t go into here. All you really need to know is that they provide a clear and unambiguous pathway to permanent residency and citizenship.

Notionally, those most adept at navigating the migration system can still gain citizenship, just six months later than they would have on a permanent protection visa. The concession to Palmer reduced the bar on citizenship, which is supposedly the entire point of TPVs, to an administrative speed bump.

Morrison would have known this was the case when he made the deal with Palmer in the first place. A fact that becomes obvious when you consider his awkward performance when announcing the policy shift.

When questioned over the ability of refugees to gain permanent visas through the Shev pathway, Morrison swatted it away with the usual “talk until they forget what they asked” bluster. The closest to a substantive defence he offered was a rather wan argument relating to the administrative difficulties refugees would face in following this path.

To be clear, there was no explanation or justification of this concession within the department either. There is no secret internal document that helps any of this make sense. There were no internal briefings revealing the hidden virtues of safe haven enterprise visas. Even the security briefing on deterrence measures leaked earlier this year is silent on any supposed benefit of the temporary visa regime.

That matters because granting a concession that so completely undermines the core feature of a policy is an admission that the original policy itself serves no practical purpose. This, in turn, makes some of Morrison’s negotiation tactics towards the end of 2014 truly extraordinary.

In a final push to get the policy over the line, Morrison made a clear threat to crossbench senators. The 1,550 people then residing on Christmas Island, including a substantial number of children, would be sent to Nauru and Manus instead of being resettled in Australia if the legislation failed to pass. As several politicians observed at the time, the government was in effect holding children in detention to ransom.

What I personally can’t get past, though, was the decision to use 31 infant children as a bargaining chip to convince Ricky Muir to vote for the bill. Until this intervention all 31 babies and their families were due to be returned to Nauru and it was made clear that this would be their fate unless Muir allowed the TPV legislation to pass.

However, if the policy served no practical purpose, and Morrison knew this, then surely there was nothing preventing him from granting them the ability to stay outside of any political deals.

They were newborns. Surely if it was clear we could accommodate them, it should have just happened. That should be the standard we demand. Instead Morrison chose to make their health and safety contingent on securing a political victory in the most meaningless policy fight I’ve seen in the refugee space. All so that he can be the kind of guy who does what he says he will.