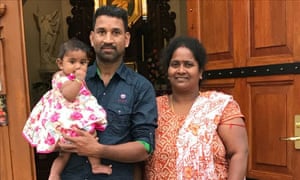 A judge in Melbourne has dismissed an appeal from a family of Tamil asylum seekers to stay in Australia.

It concludes a nine-and-a-half-month campaign to stop their deportation to Sri Lanka led by the central Queensland town of Biloela, where the family had been living prior to their detention.

Tamil couple Priya and Nades and their Australian-born daughters, Kopika and Tharunicaa, were taken from their home by Australian Border Force officers in March during a dawn raid, because Priya’s bridging visa had expired.

In June, the family lost their federal court case against deportation, prompting their lawyers to lodge an appeal. Meanwhile, more than 141,000 people signed a Change.org petition urging the home affairs minister, Peter Dutton, to intervene.

But in his judgment handed down at noon on Friday at the administrative appeals tribunal, Justice John Middleton said he had dismissed the appeal. But he ordered the department be restrained from deporting the family until 4pm on 1 February, “having regard to the time of year”.

Biloela resident and family friend Angela Fredericks said Kopika and Tharunicaa were “Australian born and bred” and should be flying home to Biloela for Christmas.

“Mr Dutton had the power to end this family’s ordeal on day one and he still has that power now,” Fredericks said.

“Please, Mr Dutton: listen to the 140,000 Australians that are standing with these two little Queenslanders and their loving mum and dad. Bring them home to Biloela.”

Before their detention the family had been living in Biloela for four years and are well-regarded by their community. Priya and Nades came to Australia at different times by boat after Sri Lanka’s civil war. Priya met Nades in Australia in 2013 and they later married.

Priya has told advocates she had been in contact with the department of immigration prior to her bridging visa expiring to inquire about having it renewed. She said she had been told she would be issued with a new visa.

Previous appeals against the family’s deportation through the refugee tribunal and lower courts had also failed.

An advocate for the family who was present at the court, Bruce Coath, said the family’s legal team would now have to determine if they had exhausted all of their legal avenues.

“We’re really disappointed at the failure of the appeal,” he said. “While it does give us a little bit of peace of mind over Christmas that no action will be taken for their removal, they’ll be devastated I think.

“What they’re hoping for is to be able to live back in Biloela and resume their life there in the community. That seems a long, long way off at the moment.”

He said the health of the girls, now aged one and three, had begun to deteriorate in detention, and that they were suffering from vitamin deficiencies.

Aran Mylvaganam, a spokesman for the Tamil Refugee Council, has been lobbying for the family to stay in Australia since they were detained. He said he did not understand why the family could not be placed in community detention rather than held in the Melbourne immigration transit accommodation centre in Broadmeadows.

“These two girls are going to spend their Christmas in detention,” he said.

“I speak to the family quite regularly and the father is quite worried in particular about his oldest daughter, who is showing signs of post-traumatic stress disorder and she is isolated, lonely and missing her friends.”